I have been introducing you to the the members of Alpha Flood and today I am finishing up with the talented keyboardist Richard West.

Any fans of Threshold are well aware the band produces some pretty aggressive guitar riffs and solos.  However, what is often over-looked is the contributions that keyboardist Richard West offers.  Threshold has never used keyboards in abundance, but when West does jump in front of the parade, it’s a welcome and refreshing change that enhances the song each and every time. 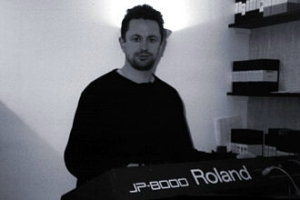 Not a super flashy keyboard player, West’s work on the keys in Threshold is just plain solid.  There’s never a moment where the keyboards are out of place, but on the flip-side, there aren’t very many moments where he gets to shine.  Keyboards for Threshold usually consist of touching and emotional moments on the piano, or atmospheric background tones to complement the guitar melodies and solos.  However, there is the odd track here and there in the Threshold discography where West gets the chance to let loose, and we have an exception to the usual formula.  When that happens, not only do the keyboards complement whatever grungy guitar riff is invariably dominating the sound, but we find West jumping in with a ear-popping solo effort of his own to hog some attention from the listener.

West also has his own band with wife Farrah – League of Lights.  More melodic sounding, and the below video gives us a chance to hear West showcase his fingers.  Give this, and Dec’s propensity to have more keyboards in his writing, I’m really looking forward to hear what West puts forth with Alpha Flood.

At 14 years old, hearing Led Zeppelin's "Black Dog" for the first time, music all at once became an incredibly passionate part of my life. It gave me wonder, appreciation, awe, inspiration, amazement, desire, drive, determination and probably a whole host of other emotions. It breathed life into me; gave me a purpose; made me a fan of something. Nowadays, I don't do anything without music. I don't have much love for death metal, electronica or any genre requiring "post" or "core" in its name. I know what I like, and I'm a Classic/Glam/Melodic/Progressive Rock kinda guy. Splash a little metal and symphonic rock along with it, and those are my tastes.

Dissona Back in the Studio