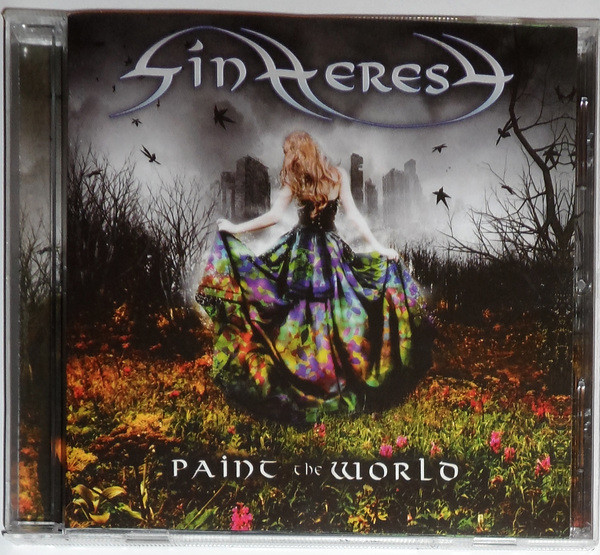 SinHeresY is a fairly new symphonic heavy metal band from Trieste, Italy, having formed in 2009, and released their first EP called The Spiders and the Butterfly in 2011.  Paint the World is their first full-length album and features the dual vocal talents of Cecilia Petrini and Stefano Sain, along with guitarist Lorenzo Pasutto, bassist Davide Sportiello, keyboardist Daniele Girardelli, and drummer Alex Vescovi.

On first listen, their sound is similar in the vein of bands such as their fellow Italians Lacuna Coil, Swedish/Danish group Amaranthe, or even a taste of Evanescence, and they cite other musical influences from bands including Nightwish, After Forever, Kamelot, Within Temptation, Delain, Sirenia, and Symphony X, to name a few.  However, SinHeresY is not a mere copycat, and the band has merged their influences to create their own signature style.  They serve up a tasty smorgasbord of songs that incorporate their influences, interests, and intrigues that create an eclectic album that contains a thread of stylistic continuity.

The album starts with the powerful five and a half minute song Last Fall, which begins with an ominous orchestral introduction that could be part of a movie soundtrack.  Then the energetic entry of the band’s guitars and drums come in on the heels of the symphonic intro that set the mood for the song.  The duetic style between Cecilia and Stefano doubled with their own harmonies provide nice vocal layering that keep up with the unrelenting pace of the instruments.  About halfway through the song, a powerful brass and percussion-led symphonic interlude detours the song as it segues into the band’s instrumental solo section with alternating keyboard and guitar solos.  The vocals then re-enter to reprise the bridge and chorus until the strong instrumental outro with an echoing percussive finale.  This song is a standout on the album, a great choice for an opener, and a trademark for their symphonic metal sound.

The Gambler is the second track, and begins with a strong, well-paced guitar riff undergirded by synth strings and held down with a steady tempo by the bass and drums.  This is a very catchy song with some great instrumental and vocal hooks that are consistent throughout.  The interplay between Cecilia’s and Stefano’s vocals as well as between Lorenzo’s guitar and Daniele’s keyboards are seamless.  Again, the center of this song showcases a complete change in style with a short instrumental interlude with classical guitar and accordion with symphonic accompaniment that shifts the listeners from the groove-laden metal that has defined the song thus far.  It gives a nice musical break before re-entering the afore-mentioned style that remains for the duration of the track aside from a brief vocal acapella moment by Stefano, and plays out until the song ends abruptly with the sound of shattering glass.  This is another song that rates high to me from the whole album as a trademark favorite.

The titular song, Paint the World, is the third track that starts with Cecilia’s muted acapella singing of the upbeat chorus, as her voice is brought into audial clarity with the entry of the rest of the band that reiterates the choral line.  Stefano introduces the verse in this piece, and carries the bulk of the verses while Cecilia dominates the choruses with occasional overlaps/tradeoffs.  This song is musically fairly straightforward and power chord-driven, but very listenable, catchy, and upbeat in its short three and a half minutes.

Roses & Thorns is the ballad of the album and starts off with a piano introduction with a light orchestral support.  The rest of the rhythm instruments do not enter until about halfway into the song, as it continues to climax until the end.  There is a beautiful solo section in the middle that begins more symphonically with strings, timpani, and piano that the band joins into shortly and adds the guitar solo, which then melds into the re-entry of the chorus.  The band then drops out for the last 30 seconds of the song for the symphony to carry out the theme to the end.

The fifth song, Made for Sin, doesn’t waste any time coming off the previous ballad with a moderately paced, guitar-driven song.  Opened by the sound of a thunderstorm, the guitars dig in right away and carry the song along throughout.  The vocals trade off evenly throughout, and the guitar solo is an unadorned, typical metal solo as the chorus reprises a couple more times until the clean ending.  This track is fairly basic heavy metal in style, and would be something that could be on radio airplay if it were chosen as a single release.  In contrast to other tracks on this album, this song has no frills attached and by comparison almost seems “average” to me.

Break Point begins by hearing the riffs of the song as if one is outside a club door, hearing it on the outside as the clinks of glasses and conversations of patrons are heard over the muted music.  A clean break after a door slams, starts the riffs again, but without the club filter as it kicks it off with the guitar and keys carrying the main lines, as drums and a bit of funk bass hold down the groove-laden rhythm, which then drop out when the vocals enter.  Before the verse is over, however, all the instruments re-enter and push the song forward with a very groovy beat throughout the song.  The keys and guitar take the solo after a growl-ish vocal bridge, and then the chorus re-enters in the previous vein of the song.  Even though the chorus repeats the same line 4 times, it alternates between Cecilia’s and Stefano’s voices with different melodies, so it doesn’t feel too repetitive.

Notching the tempo down a little bit, Lost in the Shadows begins with a pleasant but ominous symphonic introduction, but is soon interrupted by a brutal attack of guitars and drums.  This backs off when the vocals are introduced on the verses, but the heaviness still continues throughout the song while the lovely vocal melodies linger overhead.  Later, the addition of a vocal choir accentuates the vocal lines with some countermelody to balance it with the rest of the music.  The song concludes with a dramatic symphonic soundtrack of an ending, making this song a true mascot for symphonic metal.

The eighth track, Our Angel (dedicated to Gabriele), starts off as another ballad with only an acoustic guitar to introduce the song, with an entry of flute and light timpani, while Cecelia’s ethereal vocals ease into the verse, later joined by Stefano.  However, the song continues to build with stronger, higher vocals and additional instrumentation that layers to include strings and woodwinds. However, halfway through the song the full band joins the song and gives it a hard-hitting finale for the remainder of the somewhat melancholic song commemorating the loss of a child.

Elua’s Gift is a somewhat thematic departure from the other songs musically as it starts with a strong Middle-Eastern flavor, which might have been inspired by the source from which the song takes its inspiration (Jacqueline Carey’s book series Kushiel’s Legacy). This song offers completely different sound from the band including orchestration and choir as well as highlights from Middle Eastern instruments such as the oud, ney, and daf.  The band enters with a strong presence about 45 seconds into it, and then is driven by Cecilia’s vocals and Davide’s bass and Alex’s drums as the verse begins.  Before long, Lorenzo’s guitars rejoin his bandmates as well as Stefano’s vocals and continue to perform a well-crafted song that continues to include some of the symphonic and choral elements throughout the song, and segues out again with solely Middle-Eastern instrumentation.  Personally, I am a fan of the Middle-Eastern style of music, to include oriental metal, so this song greatly appealed to me and is probably my most favorite song on the album.

The tenth and bonus track on the album is Lying Dreams.  It begins without any apology with a hard-hitting melodic metal introduction. This energetic piece carries the album out with a bang, and is generally a guitar-driven song.  For a bonus track it is not particularly flashy but provides a straightforward ending to the album with a song that is motivating but not perhaps as memorable as some of the other songs on the album.  It is catchy enough to get accustomed to it fairly quickly but it doesn’t blaze any new trails in and of itself, especially in comparison to some of the other song offerings by the group, but it is a nice inclusion nonetheless.

Overall, Paint the World is a very pleasing album to listen to and is one that can sustain several spins in succession without being tiresome.  For a newer band, SinHeresY has a mature sound that seems to have developed quickly among its members, for this being their first full-length album.  Their sound is very accessible and well-balanced, and they draw from a number of influences to create their style, providing some variation within the album itself that keeps the album interesting and engaging.  Symphonic metal is a genre that when done well can be very satisfying, and this band seems to have found the right formula to make it work quite effectively without being over the top or underdone. Their songs are not “paint by number” and they show a spectrum of styles under the symphonic metal umbrella, which allows the album to avoid being mundane or repetitive.  They are definitely one to be on any metal fan’s

Lacy has been immersed in music her whole life, from “naming that tune” at the age of 1.5 through being classically trained in several instruments through adulthood. She was introduced to the metal genre in late elementary school/middle school by a friend and after a childhood of the top 40, has never looked back since. First exposed to the progressive genre of metal via Dream Theater’s “Images and Words” album, Lacy has been an avid fan of prog metal ever since. Her love of heavy metal and classical music mix well in the progressive, melodic, symphonic, power, and neo-classical styles of metal. An ever-learning student of the field, Lacy loves to learn of new, innovative, and intelligent music in this genre and relishes having the chance to actually review albums and conduct interviews with the musicians themselves to share and to learn about with her fellow metal family. She also enjoys helping the magazine as its CEO. Lacy is an art therapist and author by day and amateur musician by hobby, and currently plays flute, alto flute, oboe, and bass guitar in various ensembles.