In my formative music listening years, bands were bands.  Three, four, or five guys got (and stuck) together to make music, tour, and repeat as necessary.  I never knew any better.  Project based work either didn’t exist, or what’s more likely is that project based work wasn’t as marketable in the music industry, and just didn’t get the radio and/or video exposure that “bands” did.  Or it could be that I wasn’t much of a progressive-rock fan, and that’s where the majority of project-based music comes from.  Either way, I don’t know … and at this point, it no longer matters.  I have become a tremendous fan of project based acts such as Ayreon and Avantasia, or acts that just come together as a side project (such as Transatlantic, Flying Colors, Affector and Epysode) while maintaining their place in their established “bands”.  Such has been Ian Parry’s 25 year musical career – working with a very diverse and distinguished collection of musicians in a handful of bands (including under his own name as a solo act) and lending contributions to other established artists such as Ayreon and Royal Hunt.

Some entertainment mediums have great sequels – Bat out of Hell I and II; Van Halen I and II (let’s just conveniently forget the third installments of those); Operation Mindcr… actually, scratch that one.  There are also some great trilogies – Lord of The Rings; Avantasia’s The Wicked Symphony; Allen/Lande’s Battle-Revenge-Showdown.  I don’t know of too many quadrilogy’s – Die Hard is the best I can come up with.  What is more often the case though, is the more a franchise grows, the quality diminishes with each successive release.  So when an amazing pentalogy comes along, it’s worthy to take notice.  Some may think it’s an exercise in quantitative self indulgence.  In this case, it most certainly is not.  I’m speaking of Ian Parry’s five album Consortium Project collection.

These five albums (starting with Criminals and Kings released in 1999, and concluding with Species almost one year ago) weave a complex and very intricate tale from what could be a parallel universe, or how ours turns out depending on how a variety of global-reaching cultural, social and economic issues unfold.  Each album builds upon the story of the previous album, and takes the listener through centuries of events of how mankind evolves:

Criminals and Kings is a reflection on our current generation

Continuum in Extremis picks up a century later, with mankind split by our genders – men living in asylum, women evolving to a higher plane, and dominating society

Terra Incognita …. after the depletion of the ozone, and while women had secluded themselves in a biosphere, its safety is threatened, and a search for a new world begins

Children of Tomorrow recounts how this society started on the path it did, and an unspeakable truth hidden for generations

Bringing us to the final chapter of this epic tale, Species, which has a single scholar searching for mankind’s true origins, and ends up “on a final epic journey into outer space met with dire consequences the world has never known.”

With an all star cast of musicians including Stephan Lill (Vanden Plas) on guitars, Casey Grillo (Kamelot) on drums, and Kris Gildenlöw (Pain of Salvation) on bass, Species is a brilliant conclusion to Parry’s pentalogy.  Other than specific references to particular songs, my comments below could be said of pretty much any of the 5 Consortium Project albums.  Having just discovered these albums about 6 weeks ago, it has been quite an experience.  I am a huge fan of concept albums, so to discover a suite of concept albums was like an eargasm… but a lot to take in all at once. 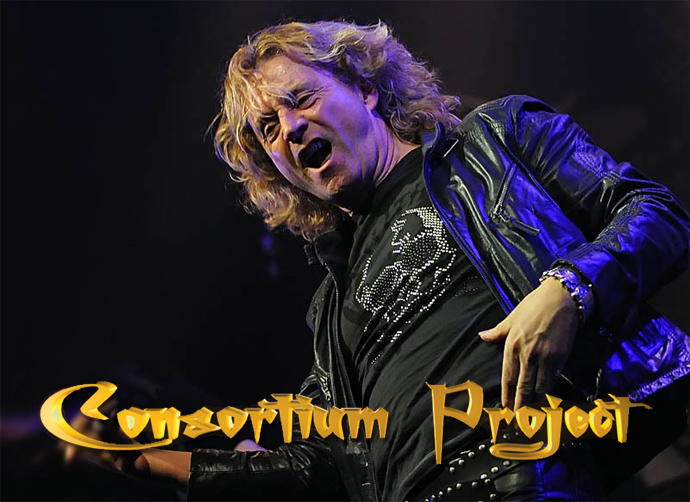 [/lightbox] Overall, Species is filled with a fantastic blend of guitar and keyboards… neither grabbing the attention over the other for too long.  There are little guitar and keyboard licks and wails placed appropriately against the main riffs and melodies which had me listening to the songs over and over again just to try and catch what I missed the first (and second, and third…) time around.  The production/mix was bang on in my (untrained) opinion, placing each musical element at just the right place, at the right time.   Parry’s singing takes you through the story of the scholar discovering mankind’s secret (alien) origins, and near destruction of the planet and mankind, concluding with the relief of avoiding a full blown catastrophe.  Given the storyline, there is little presence of joy or celebratory moments (The Worst Has Yet To Come opens with “If hell feels closer!”), with Parry portraying all the right emotions – anger, rage, pain, fear to pull you in to (and through) the storyline.  Combine that with the fact he has excellent range with some fabulous screams and long notes (particularly in An Untold Message), the vocals alone make this album a treasure.  The guitar melody in To The Earth and Back (appropriate for the title, being a riff that goes up-and-down; back-and-forth) was probably my favorite on the album – where there barely a hint of a ballad until the concluding track Oracle.  There are the fast tracks – Origins of Mankind, the aforementioned To the Earth and Back; more methodically paced Sirens and Silence Calling, but all are head-banging worthy – especially the heaviest tune of the album, Enemy Within.

Clocking in at just over 48 minutes, with To the Earth and Back being the longest track at 6 minutes, Species is accessible enough for the every-day metal fan, while complex and technical enough to tantalize the progressive-metal crowd.  Fortunately, all 5 albums are available on Spotify, or at Lion Music.

If you like the music, you can also check out  the rest of Parry’s work at his official site, or his Facebook page.

At 14 years old, hearing Led Zeppelin's "Black Dog" for the first time, music all at once became an incredibly passionate part of my life. It gave me wonder, appreciation, awe, inspiration, amazement, desire, drive, determination and probably a whole host of other emotions. It breathed life into me; gave me a purpose; made me a fan of something. Nowadays, I don't do anything without music. I don't have much love for death metal, electronica or any genre requiring "post" or "core" in its name. I know what I like, and I'm a Classic/Glam/Melodic/Progressive Rock kinda guy. Splash a little metal and symphonic rock along with it, and those are my tastes.