The ANABASIS Back In The Studio For Round Two

Two years after the release of the debut Back from Being Gone by The Anabasis, the progressive rock collaboration project of composer/multi instrumentalist Barry Thompson and writer George Andrade, the two gentlemen have finally entered the studio to begin work on The Anabasis II.

The concept behind The Anabasis Project is to provide a song framework around which the musicians would play in their own style and sound. The resulting album, Back from Being Gone, was highly received by critics, including the Lady Herself (whose review can be read here). Now Thompson and Andrade are back, and the work has begun….

“Look for The ANABASIS to evolve. This next album will be more focused, yet the music will stretch even closer to the edges of insanity, aggression, happiness and despair. Lyrically, it will be brutally honest while leaving the listener enough room to find their own personal meaning within its narrative. Musically, it will explore some different territory than the debut album. But it will still be recognizable as The ANABASIS.” –Barry Thompson, The Anabasis

The first album had a stellar lineup of musicians, including Ryo Okumoto (Spock’s Beard), Gordon Tittsworth (Images of Eden), Per Fredrik ‘Pellek’ Asly (Damnation Angels) and a solid group of guest musicians. I was able to ask Thompson about the upcoming lineup, and he did confirm the return of all three of these gentlemen, though added that a lot of the keyboard duties would be handled by Jeroen Hendrix. Thompson noted that Tittsworth and Hendrix would be playing a much more prominent role this time around “since the music is much heavier and very….angry and aggressive in comparison to BFBG.” Just to note folks, here at Lady Obscure, we like angry and aggressive. As to other musicians, I have heard some names mentioned by Thompson here and there, but nothing he would confirm at this time. As of this writing, the last update from The Anabasis camp was as follows….

“Barry and I worked on the opening 5-6 minutes to “Overture” yesterday … we were both really pleased with what we laid down; I was able to set the scene (with the help of Barry, a very cool B&W indie film vibe) of the story more immediately and Barry introduced the musical themes more immediately, organically and beautifully. It sounds killer!” -George Andrade

The First Single From The Silverblack 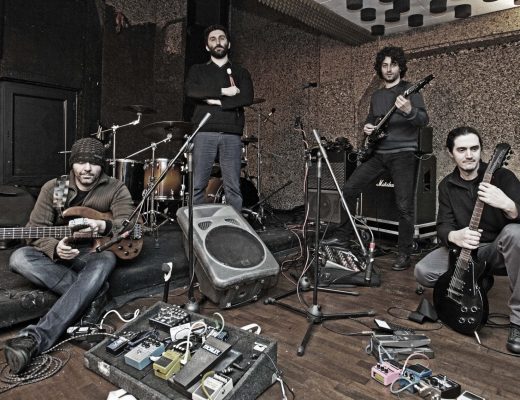 Make Sure to See a Nekropsi Concert!